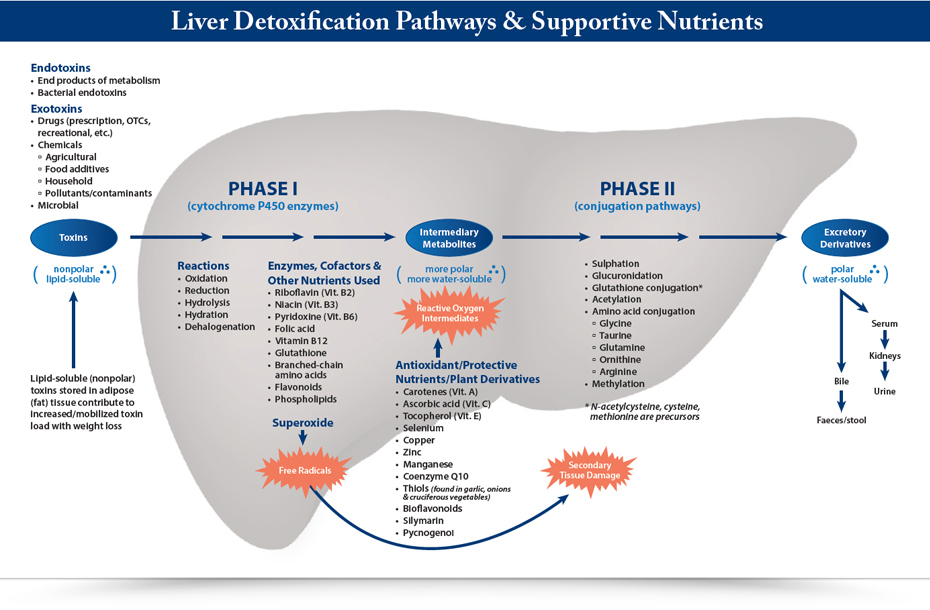 Two related fields of study, both owing to the emerging science of genetics and genomics, are beginning to help us discover the role toxins play in human health and disease. The first is toxicogenetics, which describes how the genetic differences between certain individuals allow for varying susceptibility to different toxins. Since there are hundreds of different enzymes involved in our detoxification pathways, many individuals carry gene variants (polymorphisms) that allow for more efficient conversion and removal of toxins than others. Those individuals with slower detoxification pathways for a given toxin will show signs of toxicity at much lower doses than those with normal detoxification capacity. These differences often complicate “cause-and-effect” studies in large populations that carry over into the clinic. That is, just because a large epidemiological trial does not find a statistically significant relationship between exposure to a particular toxin and a particular health outcome (the average of all genetic variants), does not mean that such a relationship does not exist in the genetically-susceptible patient.

The second field of study is based on how cells respond to the exposure to toxins as a consequence of both immediate and lifetime exposures. In essence, which genes, proteins and metabolites are altered under the influence of various toxins? The term toxicogenomics is used to describe these effects. Just as nutrigenomics tells us what genes are activated or repressed after the consumption of a nutrient, so toxicogenomic studies tell us what genes are activated or repressed when cells are exposed to a particular toxin. Another related term, the “exposome,” has emerged to describe the total lifetime exposure to environmental agents which affect genomics (the mixed term for this is “exposomics”).

The reason this is so important, and why so many new terms need to be created, is that the impact of toxins is both cumulative (over time) and synergistic (between different substances), requiring the overlapping of numerous disciplines. High doses of some toxins over a very short period of time may have one type of negative outcome (usually well-understood acute toxicity syndromes), while smaller doses over a long period of time may have quite a different set of negative outcomes (difficult to study, chronic effects of long-term low exposures). Likewise, small doses of a particular toxin in a person with a strong detoxification capacity may have no discernible negative outcomes at all, while the same or even lower dose in another person might lead to a wide range of abnormalities which often go unexplained. This is why many clinicians consider detoxification protocols, those protocols designed to periodically increase the body’s detoxification processes, to be part of a long-term strategy to maintain health in the modern world.

This post is a modified excerpt of Dr. Guilliams’ new book Functional Strategies for the Management of Gastrointestinal Disorders, designed to help clinicians navigate the principles and protocols of the functional and metabolic medicine approach to the complex topic of GI health.