Strontium (Sr) is an alkali earth metal, with characteristics very similar to that of calcium; though having an atomic weight nearly double that of calcium. First discovered in the 18th century, this trace element is found in ground water, ocean water and in various foods such as leafy green vegetables and some seafood. The ability for Sr to naturally accumulate in the bones of animals after being fed small doses was first published in 1870.1,2 However, it wasn’t until the 1950s that human studies were first published; most notably McCaslin and Jane’s case series of subjects given strontium lactate (6.4 grams/day in divided doses- delivering 1.7 grams/day of Sr) published in the Mayo Clinic Proceedings in 1959.3 They concluded their study by saying “A study has been made of the case records of 32 patients treated for osteoporosis with strontium lactate, or strontium lactate with hormones, and then traced for various periods with repeated physical and roentgenographic examinations.

Marked subjective improvement was experienced by 84 per cent of the patients. Although the mechanism of action of strontium lactate in the treatment of osteoporosis remains to be elucidated, the therapeutic value of the drug appears to be established.” However, it would be another four decades before the use of strontium would become a common therapy for osteoporosis, with the approval of the patentable compound Sr Ranelate (as Osseor® / Protelos® / Protos®) in Europe and elsewhere.† Sr Ranelate is a compound formed from two molecules of strontium with ranelic acid, which delivers 340 mg of elemental strontium in every gram. The approval of Sr Ranelate was based upon a series of highly successful Phase 2 and Phase 3 clinical trials published between 2002-2005; along with a host of animal studies and mechanism studies published in the preceding years.4,5,6,7

These studies provided strong evidence for Sr ranelate’s anti-fracture benefits, which was associated with Sr accumulation in bone and increased bone mineral density (BMD).8,9 Subsequently, Sr Ranelate was considered a first-line therapy for anti-fracture therapy in post-menopausal women in many of the countries where it was approved.

The use of oral strontium compounds to improve bone strength and reduce fracture risk has proven to be quite successful over the past few decades, established using experiments in both humans and animals. These clinical results align with a host of basic scientific research showing numerous mechanisms by which strontium modulates bone architecture and metabolism. Nonetheless, the use of oral strontium compounds for improving bone strength is controversial amongst some clinicians for a variety of reasons.

This blog is an excerpt taken from a whitepaper recently written by Dr. Guilliams discussing the data, for and against, the use of oral strontium therapies for bone-building purposes in subjects that are at-risk for fractures; including therapeutic conundrums that arise when successfully using strontium. 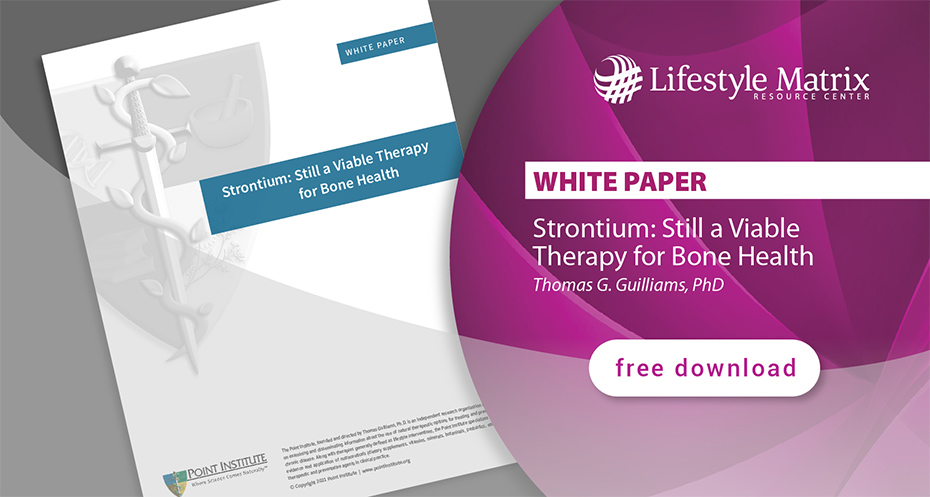