How many of your patients have tried a detox that just didn’t work out as well as they planned? Probably more than just a few. If they stuck to the protocol, but ended up feeling worse than when they started, the elimination pathway could the problem. It may be backed up and saturated with all sorts of toxins, leaving your patients feeling uncomfortable and perhaps experiencing undesirable die-off reactions. These can be signs that their elimination pathways are overwhelmed and congested. In these types of situations, additional Phase 3 elimination support may be the key to getting rid of the difficult-to-remove toxins that can wreak havoc on the gut, especially endotoxins and mycotoxins.

Put an End to Endotoxins

When unwanted bacteria in the gut are destroyed (from antimicrobials, probiotics, changes in diet, etc.), they begin releasing endotoxins like lipopolysaccharides (LPS) which contribute to increased toxic burden. Endotoxins may even cross into the bloodstream when the gut is inflamed and leaky, triggering an immune response. Inflammation can also be experienced throughout the body and further complicate detoxification.

Serum bovine immunoglobulins (SBIs) are a “biological” binder that can attach to endotoxins (as well as several other bacterial fragments, microbes and toxins) and remove them from the gut, a necessary step to optimizing elimination pathways. This reduces toxin encounters by the immune system and helps reset immune tolerance. In addition to minimizing immune reactivity, SBIs facilitate gut barrier strength and enhance microbiome balance. Overall, SBIs are a powerful tool in your toolbelt, especially for removing harmful endotoxins.

Mycotoxins are also a problem. Mycotoxins are harmful chemicals emitted by particular strains of mold and are more frequently ingested than you might think. Mycotoxins are found in many common food and beverages, like coffee, cheeses, dried fruits and cured meats. As secondary metabolites of fungi, they can lead to some serious gut symptoms. To remove mycotoxins from the gut, different kinds of binders are often necessary. Here are some options to consider:

Among its many functions, bile is secreted from the liver and into the duodenum to remove the toxins that the liver processes. If there is poor bile flow, toxins may remain stagnant or recirculate rather than being properly excreted, which compounds the effects of toxic burden. Poor bile flow will not only damper elimination pathways, but also lead to conditions like SIBO, since the slightly alkaline properties of bile help maintain microbial balance in the gut. To assist for biliary excretion, consider phosphatidylcholine and bitters: 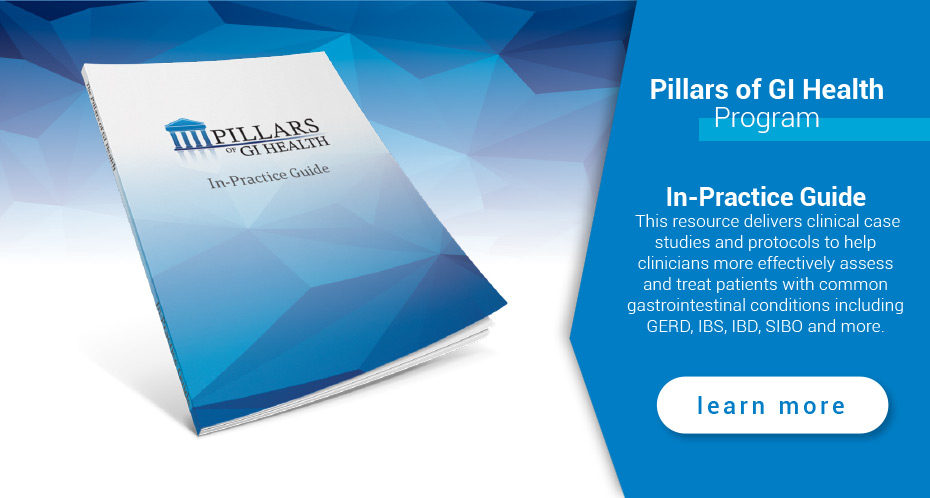 A cleared-up elimination pathway can help your patients achieve a more thorough detox. In addition to adequate insoluble fiber and water in the diet, Phase 3 detoxification support can be found with several types of binders that help remove problematic endotoxins and mycotoxins in the gut. Alongside adequate bile support, removing stubborn toxins with targeted binders can go a long way toward an enhanced detoxification protocol that helps your patients feel better faster.

Dr. Joseph Ornelas is the Pillars of GI Health Brand Manager at Lifestyle Matrix Resource Center. He holds a PhD from University of Illinois with concentration in Health Economics, an MA degree in Public Policy from the Harris School at the University of Chicago, an MS degree in Health Systems Management from Rush University, and a DC degree from National University of Health Sciences. As a licensed provider and health economist, Dr. Ornelas has published numerous evidence-based clinical practice guidelines, helping to improve quality standards of care and provide value for health care practitioners across several specialty areas.