The Food and Nutrition Board (FNB) developed dietary folate equivalents (DFEs) to reflect the higher bioavailability of supplemental folic acid compared to that of food folate (see below). The intake recommendations for folate are provided in the recommended dietary allowance (RDA) as micrograms (mcg) of DFEs.2 The FNB defines DFE as follows:

There is confusion about how to define the DFE conversion for supplemental 5-MTHF since some consider it to be a natural folate and FDA has left it to the discretion of each manufacturer.2 Since 5-MTHF in supplements is an un-complexed monoglutamate, synthesized from folic acid, its absorption is similar to folic acid. Therefore, 5-MTHF content on labels should be calculated the same as folic acid (0.5 mcg 5-MTHF= 1 mcg DFE).

Folates exist in mono and polyglutamate forms in the diet.3 Dietary folate polyglutamates have to first be hydrolyzed to their monoglutamate forms by the action of folate hydrolase, then absorbed mainly in the proximal part of the small intestine via a specialized acidic pH-dependent carrier-mediated mechanism. The bioavailability of food folate is commonly estimated at 50% of folic acid bioavailability when establishing food recommendations,1 but this should be considered a rough estimate, as data on the bioavailability of food folate varies between 30% and 98%, depending on how the study is performed.4 Regardless, food-derived folates are rarely used in dietary supplement products.

Three forms of folate are currently used in dietary supplements: folic acid, folinic acid and 5-methyltetrahydrofolate (5-MTHF). Folinic acid (e.g., calcium folinate) is a 5-formyl derivative of tetrahydrofolic acid (THF). Synthetic 5-MTHF used in medical foods and in dietary supplements (both calcium and glucosamine salt forms are available) is not derived from “natural sources” and is not, as some describe it, a dietary folate. These compounds would be considered bio-equivalent (or bio-identical) synthetic analogs (5-MTHF, when naturally found in foods, is mostly in a polyglutamyl, not monoglutamyl form).

Commercially available 5-MTHF is organically synthesized using folic acid as a starting material. After reduction to tetrahydrofolate and methylation, a racemic mixture (R,S) of a monoglutamyl 5-MTHF is formed. Crystallization and separation of the two stereoisomers allows for a purified S-form, which is then stabilized using calcium or glucosamine ions (the “S” describes the specific stereochemistry at the #6 carbon; this is often also called the “L” form due to the way this isomer reflects light). Therefore, 5-MTHF it is sometimes labeled as (6S)-5-methyltetrahydrofolate. Other names include levomefolic acid or L-methylfolate. Unfortunately, this process results in a raw material that is about 200 times more expensive than an equimolar amount of folic acid.

Supplemental folic acid, which must be fully reduced and methylated, is often less capable of increasing serum 5-MTHF levels in 677TT individuals compared to 677CC individuals.5  Clinical studies comparing the ability of folic acid with 5-MTHF supplementation to change serum folate levels or effect changes in homocysteine in both 677TT and 677CC subjects are limited, as most studies did not recruit sufficient 677TT individuals to reach a statistically significant conclusion.6  Some studies show no statistical difference, or only slight benefit for 5-MTHF, while others show a statistical benefit for 5-MTHF supplementation, particularly in bioavailability studies.

In a  study comparing a single dose of either 400 mcg of folic acid or an equimolar levels of 5-MTHF (416 mcg) in women homozygous for either the CC or TT polymorphism, the 5-MTHF supplementation was able to increase plasma folate levels (AUC) by nearly twice that of folic acid in 677TT individuals and by 60% in 677CC subjects.7  On the other hand, after 13 weeks of folate treatments (using either a folate-rich diet, folic acid, or 5-MTHF) equivalent to 200 mcg of folic acid, each folate form was equally capable of RBC folate benefits and homocysteine lowering in subjects (Italian) with moderate hyperhomocysteinemia (mean baseline Hcy 14.1 mmol/L).8

The 5-MTHF “bioidentical” form has clear, but limited, benefits over other folate forms in some subjects. First, since all folates must be hydrolyzed into monoglutamates, reduced and methylated prior to absorption (see Figure X), 5-MTHF is the only readily absorbable folate; and second, a well-known genetic polymorphism in the final enzyme required to make 5-MTHF (i.e., MTHFR) is found in a significant number of individuals, reducing the efficiency of 5-MTHF synthesis. In some, though not all, studies, the use of 5-MTHF could improve the folate status in subjects with certain MTHFR polymorphisms, better than folic acid supplementation (folinic acid is rarely compared). 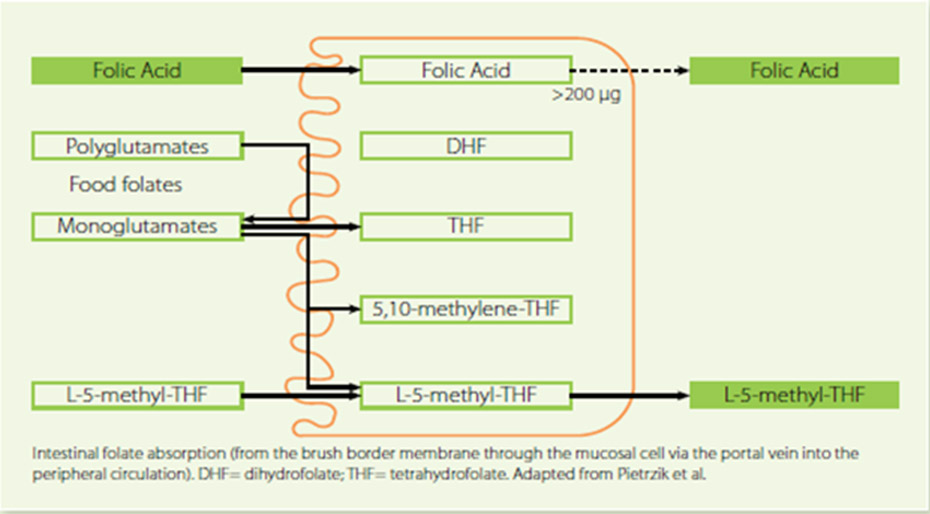 Beyond bioavailability and homocysteine-lowering, other issues may be important when comparing folic acid versus 5-MTHF supplementation. The first is that high-dose folic acid supplementation (>5 mg/day) results in an increase in serum levels of unmetabolized folic acid.9 However, this is likely due to overwhelming the capacity of the dihydrofolate reductase (DHFR) enzymes in both the intestine and liver, rather than specific deficiencies in the MTHFR enzyme.10,11

Nonetheless, while there is no clear evidence of a demonstrable negative consequence for these elevated levels of unmetabolized folic acid, supplementation above 5 mg/day of folic acid, when warranted, should be done with caution or substituted with 5-MTHF supplementation.12 The second issue often cited is that high doses of folic acid can mask (not cause) an underlying vitamin B12 deficiency; supplementation with 5-MTHF appears to be less likely to have this consequence, though this has not been confirmed by rigorous clinical trials. Since it is routinely recommended that vitamin B12 be used with any high dose folate/folic acid supplementation therapy, this issue is of little clinical concern.

This is an excerpt of the Folate monograph from the Supplementing Dietary Nutrient-Second Edition-Roadmap. 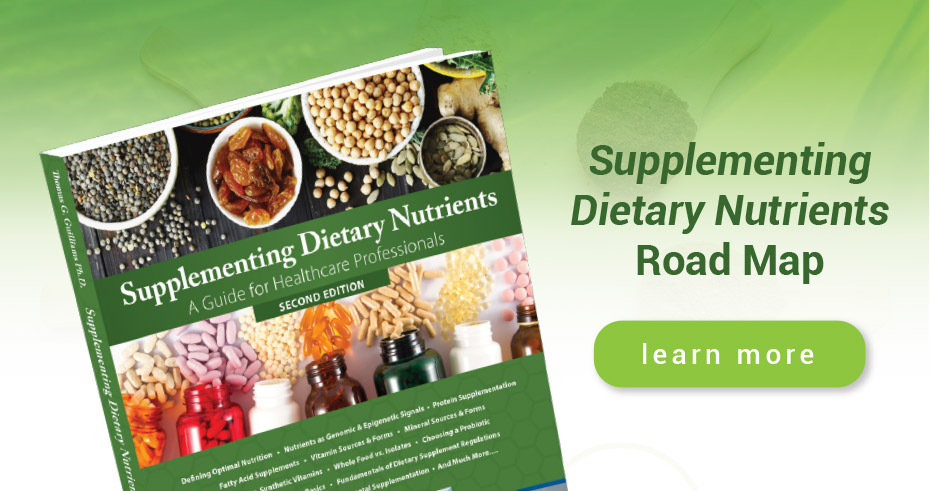