The Clinical Benefits of DPA in Fish Oil

As functional medicine providers, we know that omega-3 fatty acids in fish oil have many benefits. The health benefits include inflammatory balance, cardiovascular fitness, brain health, and normal growth and development. We have learned that these benefits come from EPA and DHA. However, new research shows that many of the benefits attributed to EPA or DHA may actually be from a lesser-known omega-3, docosapentaenoic acid or DPA. 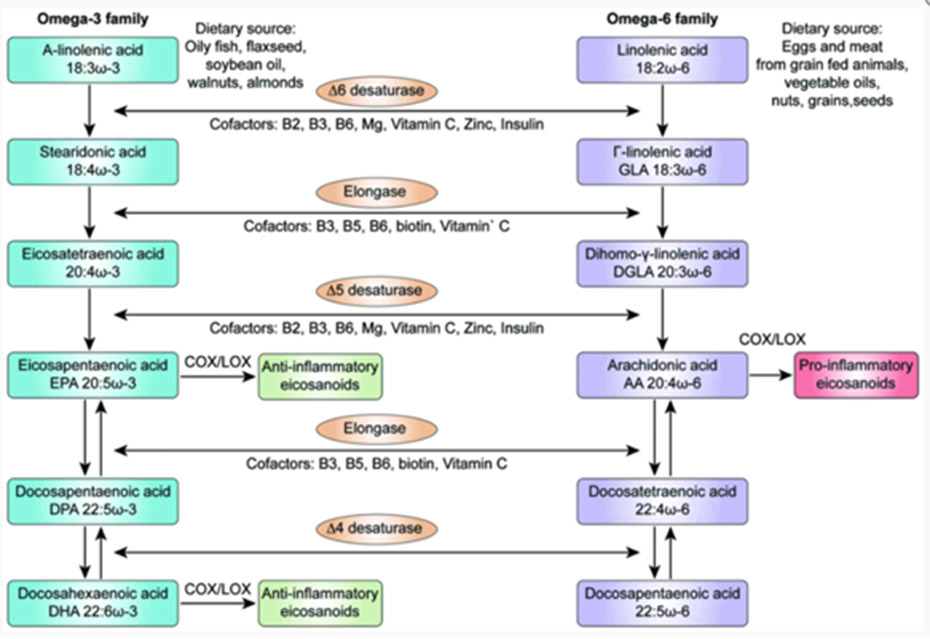 As clinicians, we have counteracted this dietary challenge by prescribing omega-3-rich fish oil. We learned supplementing with omega-3 long-chain fatty acids restores a better ratio of omega-6s and omega-3s and improves overall health. Research has shown the overlapping health effects of EPA and DHA.1 This finding has led to new research looking at the intermediate of EPA to DHA, DPA, as an important source of better health benefits.

DPA will convert in small amounts to DHA, but interestingly, DPA “retroconverts” more regularly to EPA involving the enzyme acyl-CoA oxidase in human fibroblasts.2 In Sprague-Dawley rats, a seven-day supplementation of DPA revealed an increase in DPA and EPA in many tissues but only found an increase of DHA in the liver.3 Recently, a few studies have looked directly at DPA’s impact on human physiology. In a pilot study, 73 patients who had suffered acute myocardial infraction showed low levels of EPA and DPA when compared to controls.4

Another study showed that the levels of DPA in blood platelets have a negative correlation to myocardial infarction in Australian men when compared to men with similar health and higher DPA levels.5 It has been reported that DPA inhibits platelet aggregation better than EPA or DHA, important for atherosclerosis, cerebral vascular and cardiovascular risk.5 In fact, not only does DPA improve platelet aggregation, it also has been shown to improve aortic function in hamsters by inhibiting gene expression of cycloxygense-2 (COX-2).6

DPA also plays a significant role in fetal and child development. Infants whose mothers have higher amounts of DPA in their breast milk and plasma show less incidence of allergic diseases such as asthma and eczema when compared with infants whose mothers have lower amounts of DPA.7 DPA is less oxidized than EPA and is conserved for use in tissues to be used later by the body.7 DPA in tissues throughout the body should considered a reservoir for EPA and DHA.8

The combination of improved omega-3 storage and retroconversion with the physiological effects of DPA demonstrates the need for DPA in the fish oil that you prescribe for your patients.

Bill Hogarth, DC, MBS is a licensed chiropractor in the states of Illinois and Missouri. He holds a doctorate in chiropractic from Logan University and a masters in biological sciences from the University of Minnesota. He has been a functional medicine practitioner and educator for more than three decades.